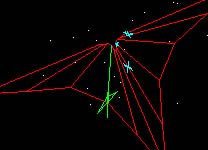 what began as a simple ui experiment turned into a full-blown video game for pocket pc. i wanted to explore the use of a stylus to replicate the "analog" feel of a trackball on old arcade games. game was released for pocket pc january 2004 and has since been ported to windows mobile smartphone, symbian series 60 (nokia 3650/7650), symbian uiq (sony-ericsson p800/p900), and nokia n-gage. game has undergone the windows pocket pc and windows smartphone logo approval process.